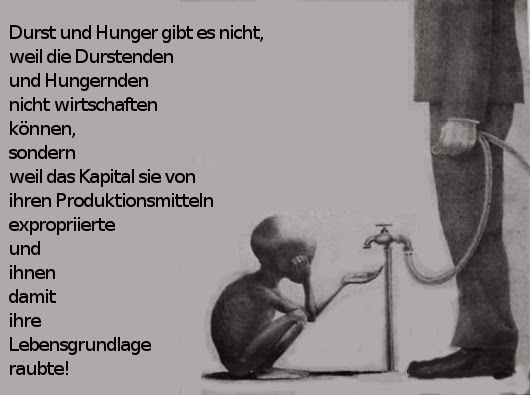 Tuesday  I’ve received a call of Amensty International. The activists are organizing a democratic protest against the privatisation of water in Greece.

Some pages in English about it:

The activists in Greece demand (translated from griechenlandsoli):

In June 170.000 signatures were handing over to the President of the Eurogroup Working Group Thomas Wieser.

200.000 people have signed the petition of WeAct and WeMove,  but Mr. Schäuble (Federal Minister of Germany of Finance Affairs) is refusing to give Imke and other activists an appointment and to participate in the handover of the signatures. In this way Mr. Schäuble shows, that he is forcing the privatisation of water („water grabbing“) AND does’nt care about the 200.000 people who are protesting democratically for the right of drinking water for the people and the 1,8 Mio people who signed a petition, that water shall be a common good.

His great-grandparents – or the government of them – committed genocide of the Ovaherero and Nama by let them die of thirst.

His parents – or the government of his parents – committed genocide of the European Jews and Rromnja… by using not only guns, but a „water lie“ too: Their victims was told, to take a shower, but when they had been arrested in the chambers, toxic gas came out of the pipelines.

It seems, that Mr. Schäuble never took the lessons of these capital crimes and he is still a kleptocrat and supporting kleptocracy.

You can write protest letters to following email adresses: wolfgang.schaeuble(at)bundestag.de and please put in CC: buergerreferat(a)bmf.bund.de

And please send it to your families, peers and friends. It would be very good, if we start a protest outside the Ministry of Wolfgang Schäuble as soon as possible.

Here you can find the call in German language of the organizers and the petition in German.  Please sign it!

The water privatisation in Greece will give Nestle more power for its Water grab in Europe. Here a documentation, how Nestle is acting: